Influencing and Listening: You can't have one without the other

This year, I formed The Energy Bar Group, which brings like-minded professionals together to bounce ideas off each other, ask questions, and learn more in depth about the methods I use with my clients. I received a fascinating question from one of the members of the group.

I struggle with the underlying assumption that we must influence others in order to get things done, make “change”, and in general, interact in the world. If we are each busy influencing each other, then at what point are we open to being influenced?  And where are we going to “be” if at the end we all somehow end up effectively influencing each other?

I think you hit on a problem that occurs quite frequently in organizations these days. It often seems like everyone is trying to influence everyone else, and no one is listening for fear that their own precious idea might lose out. These death matches often create zero sum games where no one really wins. Could be why so many big projects fail. 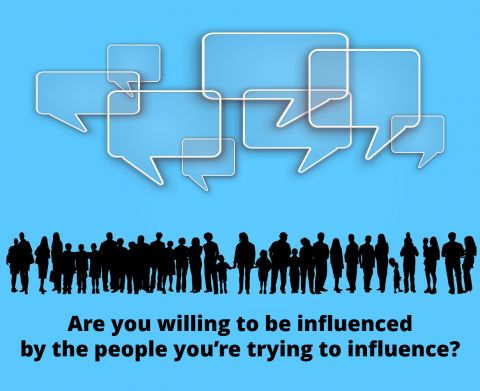 I am trying to change that way of working with The Energy Bar™. My approach is based on a willingness to be influenced by the very people you want to influence.

For example, let’s say you need another person or group to become a Strong Supporter of your idea. If you are willing to be influenced by them, then you need to be curious about why they aren’t strong supporters already. And here is the hard part: be willing to listen to them and take their concerns and ideas to heart.

Understanding why they are Grumbling is a fine first step, but now you need to explore with them how to get energy moving toward Interest, Willingness, and then Strong Support.

One Step At A Time

My friend, John Scherer told me a about a simple and elegant way he uses The Energy Bar™. He talks to people directly.

“It seems like you are resisting this idea, is that right?” He says that quite often people will agree with that statement. John then suggests that you say, “What would it take to get you Interested in this idea?”

Don’t try to get them to Strong Support, that’s asking for too much. One step at a time.

If you are interested in joining The Energy Bar Group, please go to it: http://www.energybartools.com/contact-us