How Do You Avoid The Avoidable Mistakes With Major Projects? I am beginning a series of posts on ways to easily avoid unforced errors – and I could use your ideas. I’ll explain at the end of this post.

Organizational Change: When it's the wrong time to ask for support

Several years ago, the director of a non-profit I support invited me to come to have a cup of coffee. I was told the team wanted to share about some new programs and the progress the non-profit was making. The meeting was set up as if they were only going to share about their latest news. However, in the end, the reason for my visit was revealed and they started talking about my annual contribution. I was caught off guard and somewhat offended by the surprise solicitation for money and felt it would have been better if I had known it was coming.

I learned recently that I’m not alone with feeling this way. I had the pleasure of having a conversation with Lynette Zimmerman, president and CEO of Key Elements Group, LLC last week. Lynette consults with non-profits on strategic fundraising. She said what I experienced was unfortunately common mistakes people make when asking for support: asking too soon and not being straightforward about it.

The Energy Bar: A leadership tool to shift energy from resistance to support 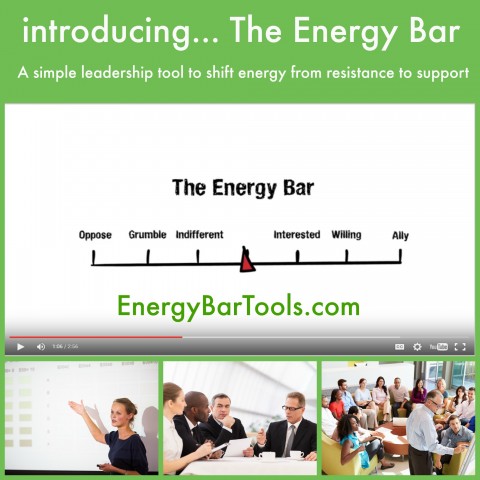 I was working with a group of very bright technical experts on their strategies for building support for change. Lots of big words and lots of concepts being thrown around. We were all getting confused - and I do this for a living.

I stopped them, and said,” Look, it’s just energy. It’s either moving this way (toward support) or that way (into resistance).”